Every February owners and managers from Social Sport Clubs from all over North America gather at a conference to share knowledge, present awards, and of course, party. These clubs are part of the Sport and Social Industry Association (SSIA). This year Chicago Sport and Social Club took home two Social Star Awards, which are kind of a big deal. If you’ve played or partied with CSSC, rest assured you’re doing it with one of the best.

This year, 174 representatives from 51 different clubs convened in St. Petersburg, FL for four days. Tampa Bay Club Sport hosted the conference and booked the James Museum for the Social Star Awards reception and ceremony. Recently opened in 2018, it was an elegant backdrop for the event attended by local celebrities from 45 different markets.

There were eight award categories with five to six final nominees each. Clubs in the SSIA were allowed one vote per category and the winners were kept secret until the ceremony. Of the eight categories, Chicago Sport and Social Club was nominated for four and won two. Tampa Bay Club Sport also won two awards. SportsLink from Charlotte, Atlanta Sport and Social Club, and Underdog Sports Leagues from Seattle were the other big winners.

My co-worker, Marko Milanovic, and I were attending the conference for the first time and we sat next to each other while we watched clubs proudly accept awards. The two of us along with Brian Irving had worked on a project together that was nominated in the Product/Program Innovation category, but we had no expectation of winning.

Our project for this category was inspired by the articles and player stats Holden Metz produced for All-Sports Series. CSSC acquired his company in 2017 and sought to expand this unique player perk on a larger scale. After months of learning, trouble shooting, and hundreds of if/then statements, we successfully trained robots to produce automated game recaps. Our referees and scorekeepers started recording player stats on site at each soccer, football, and basketball league game. We then upload the scores and stats to our robots and a convincingly accurate story is produced. The articles are emailed out to the participants and hosted on the league webpage. Participants love to read the weekly analysis of the league rankings and player stats. In fact, if we are late on releasing the recaps or make an error in a story, teams are quick to email us asking for the records to be updated.

While the video of category nominees played, we admired the innovative things other clubs did. But our project stood out against the rest as something completely different. My heart started pounding – all those sleepless nights of advanced Excel formulas floating through my head might be paying off. (We’re not talking vlookup, we’re talking nested if statements with match index just as an example.)

Anyway, my heart pounded out of my chest as they open up the envelope containing the winner. Then, after a pause that seemed to last an eternity, Chicago Sport and Social Club was announced the winner! Marko and I looked at each other in complete surprise and delight. Brian motioned for us to join him on stage to accept the award. Try not to judge me, but it was one of the proudest moments of my life. I’m used to getting second place in all my leagues, so it feels great to get a solid championship win. 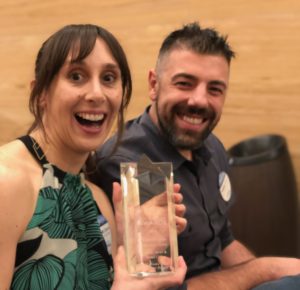 After accepting the award and posing for a quick picture, Marko and I took our seats in the audience. A couple categories later, we watched the nominations for Best Video Campaign – Professionally-Produced. My co-workers and I loved the video Sport and Social Group (Toronto) submitted. It perfectly and hilariously captured the essence of why people play adult recreational sports. Chicago Sport and Social Club was announced as the winner, and although it is a great video, we were shocked. Our video is a recap of the 2018 Volleywood Electric Beach Festival and JV Studios produced it. This is our second time winning this category in the past three years. Our Marketing Director, Nicole Dougherty and Sponsorship Director, Nikki Hartel accepted the award on behalf of our club. 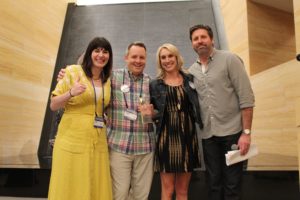 One More Star for the Trophy Case

We also received a 2019 Champions Award for achieving above a certain score on customer surveys. We were among 19 clubs who received this recognition. This award means a lot to our whole team because we take so much pride in our customers’ experiences.

This was the first year the SSIA recognized individuals with Legacy Awards. These are people who have been working in our industry for various benchmarks starting at 10 years. Notably from Chicago Sport and Social Club were Curtis Griffin and Marko Milanovic for 15 or more years. Even more impressively, our President, Chris Hastings, and Vice President, Brian Irving, were recognized for the 20-year benchmark. Furthermore, in our relatively young industry, there are people who have been doing this for 25 or more years. This includes Gary Hazan, owner of Chicago-based Players Sport & Social Group. I’m only a couple years away from the 10-year recognition and I can’t wait to accept that plaque. 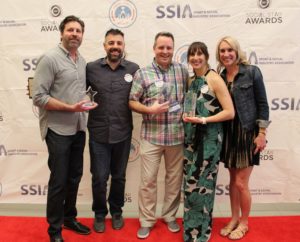 Chicago Sport and Social Club has been part of the Sport and Social Industry Association since its inception in 2010. In fact, they were among the founding members of the SSIA along with Vavi from San Diego, CA. Our president, Chris Hastings, not only helped to bring 35 clubs together the first year, but he also served on the Executive Committee as their president for two years from 2015-2017. Brian Irving currently sits on the Executive Committee and plays a huge part in connecting clubs throughout the year with knowledge share and helps ensure clubs in the SSIA meet and abide by industry standards and good practices.

A kickball team from a Tampa Bay Club Sport league stopped by the bar after their game and were surprised to learn Social Sports was an industry.

This is Why We Do It

On the last night of the conference a large group of us were networking at a local bar in St. Petersburg. A kickball team showed up in their league shirts for post-game drinks at the bar. I noticed them animatedly recounting plays from the game and laughing at team inside jokes. It was the perfect reminder of why we do what we do in our industry. It’s a unique experience you can’t get anywhere else. A bunch of adults playing sports together – for fun, for competition, for fitness, whatever the reason – and putting aside other adult responsibilities for just a few hours each week.

I couldn’t resist. I went up to that team to thank them for playing, told them we were there for the SSIA conference, and took a picture with them. They had no idea Sport and Social Clubs were an industry – maybe you didn’t either. So when you’re upset about a bad call or having the time of your life winning a championship, take a minute at the bar after the game to toast the people who run your league both behind the scenes and on site. 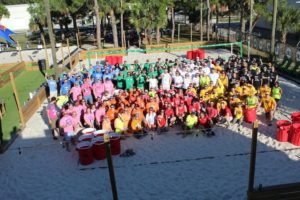 174 owners and managers from 51 different Social Sport Clubs attended the 2019 SSIA Conference in St. Petersburg, FL. Tampa Bay Club Sport hosted an afternoon of games for the attendees at the Rec Dec.